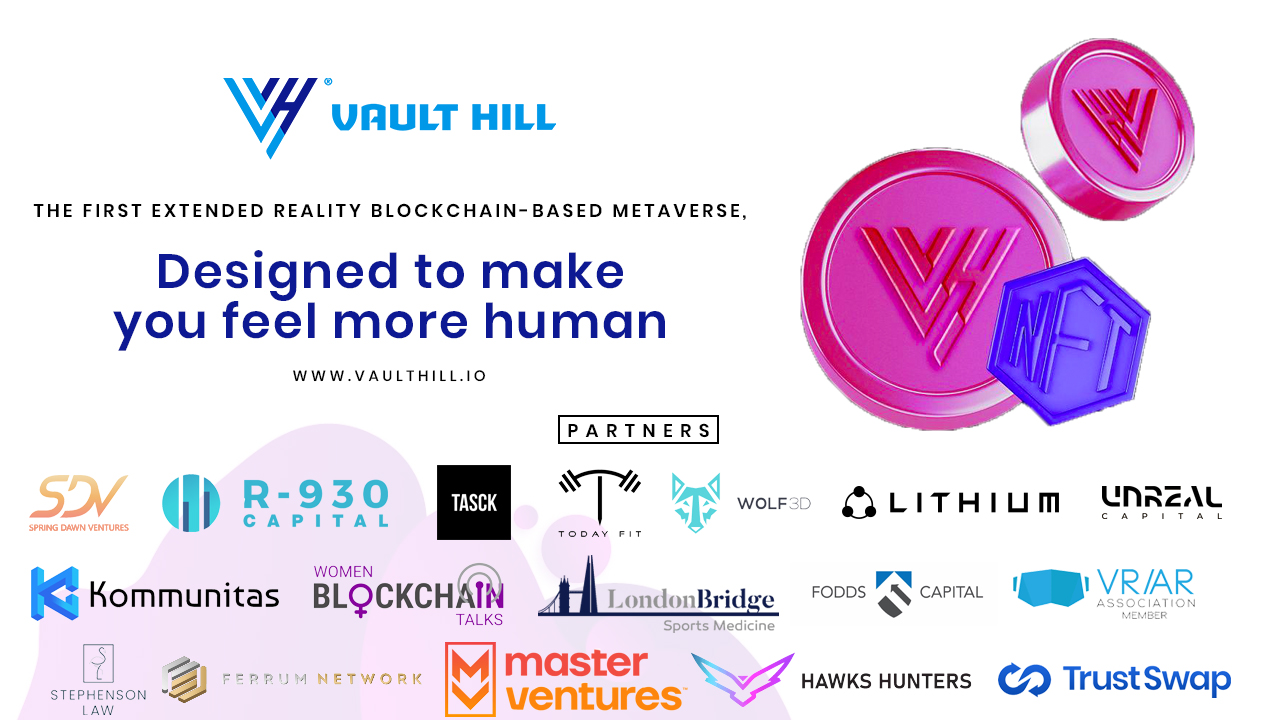 World’s first ever human-centric blockchain-based metaverse, Vault Hill, is excited to announce that it has successfully completed its pre-seed and private sale of its native token, $VHC, where it raised $2.1 million to aid the development of the metaverse designed to enhance the human experience. The rounds were led by Master Ventures with strategic investments from R-930 Capital, Unreal capital, Spring Dawn Ventures, Evan Luthra, Herd Ventures, Lithium ventures, Girnas Capital, Ferrum Network, Trustswap amongst other angel investors.

This is a huge step forward to accelerate Vault Hill’s plan to humanise technology through the creation of a constructive metaverse that focuses on the basic human instincts which allow users, content creators and developers to explore their unrestricted creative freedom whilst monetising their creation in the secure ecosystem.

Meanwhile, with the first fundraising round off the to-do list, the second round of fundraising, that is, the Initial Decentralised Offering (IDO) of the $VHC token is now ongoing from January 10-23, 2022 on eight major launchpads – MaticLaunch, Kommunitas, Lithium, Moonstarter, TrustSwap, SuperLauncher, Coinxpad and Trustpad. Vault Hill already sold out the $VHC on MaticLaunch ($100,000 raised) and Kommunitas ($145,000 raised) and the IDO on Lithium has now ended. However, the $VHC can be bought on Moonstarter from Thursday, January 13, followed by the other four launchpads.

According to Vault Hill’s Founder and CEO, Jimi Daodu, “this is a testament of the uniqueness of our product offering in the vast competitive market we are playing in and also a reflection of the hard work of the talented and diverse team at Vault Hill.”

Equally worthy of note is that although the metaverse is not yet up and running, Vault Hill has already secured six partnerships with global brands (especially for digital wearables and for improving health and wellbeing) who will be establishing their virtual office in the metaverse once it launches in Q1 2022. Likewise, the Vault Hill community is constantly growing with about 90,000 #VaultHillers currently across all social media platforms.

Considering the booming blockchain industry, and with many metaverse projects already existing, what distinguishes Vault Hill so much that it attracts an insane amount of attention from prominent blockchain venture capitalists, businesses, and individuals?

The first unique differentiator is the human-centric nature of the metaverse. The infusion of human elements in the metaverse means that Vault Hill is not offering a distant unrealistic concept, but rather, a platform that users can realistically engage with. This means that users will be able to do everything they currently do in the physical world and much more. Users will be able to interact with others, build romantic connections, play games, improve health and wellbeing, curate art, buy virtual land, own NFTs, transact on the secure platform using $VHC token or other crypto currency of choice, and also explore the seven Districts themed after basic human instincts and functions. The potential of the metaverse as a world where users get to explore different aspects of themselves and overall, feel more human with each visit, is absolutely exciting and undeniable.

Secondly, Vault Hill is the first virtual world with urban planning and development benefits to ensure users build on their Virtual Land (VLAND) respectfully. Users who own virtual land in Vault Hill City will have total creative freedom to build anything they can imagine on their land. This could range from fitness centres, fashion studio, art galleries, museums, or even libraries and earn returns as other users interact with the projects on their land. Alternatively, land owners can choose to hold their VLAND to sell later at a higher price in the marketplace.

Vault Hill is definitely a project to watch out for! So, grab your $VHC token and see you in the metaverse.Further information on Vault Hill and its development timeline can be found on the website and in the whitepaper . Also follow the social pages for the latest updates Twitter, Instagram, Telegram, Discord