Depending on his mood, Jeff Weiser settles down to work in a Parisian cafe, a mysterious cave or high above the Earth, thanks to the budding metaverse.

Weiser lives in Cincinnati, Ohio, but his workplace is in a faux realm accessed using virtual reality headgear.

While still the stuff of science fiction for most people, forerunners of the metaverse vision for the Internet’s future are already de rigueur for handfuls of people beyond the gamer and techno-hipster crowds. 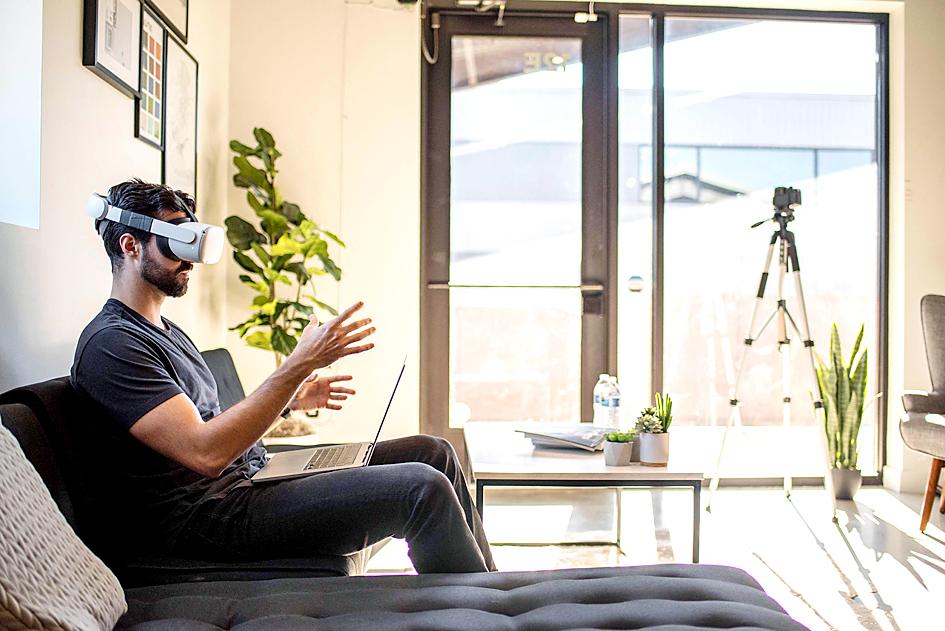 Weiser, founder of a translation start-up, spends 25 to 35 hours each week working with Oculus virtual reality (VR) gear on his head in his home.

A VR application called Immersed lets him synch screens such as his computer and smartphone to his virtual world, shutting out distractions around him at home.

Along with “increased focus,” the ergonomics are “perfect,” Weiser said.

Display screens hover where they are easily seen and can be changed to any size.

Weiser taps on his keyboard without seeing it, and appears from the outside to be speaking to himself, but in his virtual world, he interacts with avatars of colleagues as far away as Argentina and Ireland.

The COVID-19 pandemic boosted use of telework technologies that make it possible for colleagues to collaborate as teams despite being in different locations.

The Holy Grail is to replicate the kind of personal contact possible in offices.

Florent Crivello cofounded Teamflow, a start-up that tailors software for workers to collaborate virtually from their computers.

“We are building the metaverse for work,” Crivello said, adding that VR headsets are not quite ready for “prime time.”

“All of our collaboration tools are still on desktop; we want to meet people where they are,” he said.

Workers are represented by round icons that feature their picture, or live video footage of their face, and can initiate chats with colleagues by moving their “pawn” close to that of a coworker.

If the person virtually approached has a microphone hooked up, they can automatically hear each other like they would be able to in real life.

Key to the experience is “persistence,” the fact that the virtual environment exists whether a particular worker is in it or not, Crivello said, adding: “That’s a defining characteristic.”

For example, Teamflow users who “write” on a virtual white board in a faux meeting room would find it there when they return the next day.

About 1,000 people use the Teamflow app every workday.

VR app Immersed, for its part, said that it has gained tens of thousands of users after a difficult period at the end of 2019, when the company almost disappeared. “

The adoption curve was in the disillusioned phase, it was the bottom of the valley and we ran out of money,” Immersed cofounder Renji Bijoy said.

“When I told my team that they could go look for jobs, all seven of them said unanimously: ‘We’re not going anywhere,’” Bijoy said.

The pandemic fueled a trend to remote work, reviving investor interest in start-ups innovating in the sector.

At the same time, VR itself gained momentum, thanks to investments by Facebook parent Meta Platforms Inc in its Oculus unit and the metaverse overall.

“We are trying to build a world where anyone could live anywhere and put on a pair of glasses and feel like they’re actually teleporting to their virtual office,” Bijoy said.

Missing links, for Bijoy, include lifelike avatars instead of cartoonish animated characters, and body tracking that lets movements or gestures be replicated in virtual worlds.

“It’s not that far away,” Bijoy said of such technology, adding that it can been expected to be seen “much sooner than five years.”

Some users fear that working in VR would be misinterpreted or misunderstood and would rather stay anonymous, such as one graphic designer from New York who used to spend six hours a day working from Immersed during the pandemic.

He customized his Oculus headset for comfort, and built his own room in Immersed — a virtual reproduction of his favorite library complete with rustling pages and soft footsteps.

The New York resident said that his productivity soared, but his health suffered.

He forgot to take breaks, losing track of place and time.

“I would take the headset off and it was kind of jarring, it was just a bit of like a slap in the face, being back in reality,” he said.

A blood test showed he was low on Vitamin D, and he suspected part of the cause was spending so much time out of the sun and in virtual reality.

“I just stopped using it,” the designer said. “I don’t think that it’s healthy to replace reality with virtual reality.”

Comments will be moderated. Keep comments relevant to the article. Remarks containing abusive and obscene language, personal attacks of any kind or promotion will be removed and the user banned. Final decision will be at the discretion of the Taipei Times.