The New York State attorney general, Letitia James, accused Donald J. Trump’s family business late Tuesday of repeatedly misrepresenting the value of its assets to bolster its bottom line, saying in court papers that the company had engaged in “fraudulent or misleading” practices.

The filing came in response to Mr. Trump’s recent effort to block Ms. James from questioning him and two of his adult children under oath as part of a civil investigation of his business, the Trump Organization. Ms. James’s inquiry into Mr. Trump and the company is ongoing, and it is unclear whether her lawyers will ultimately file a lawsuit against them.

Still, the filing marked the first time that the attorney general’s office leveled such specific accusations against the former president’s company. Her broadside ratchets up the pressure on Mr. Trump as he seeks to shut down her investigation, which he has called a partisan witch hunt. Ms. James is a Democrat. 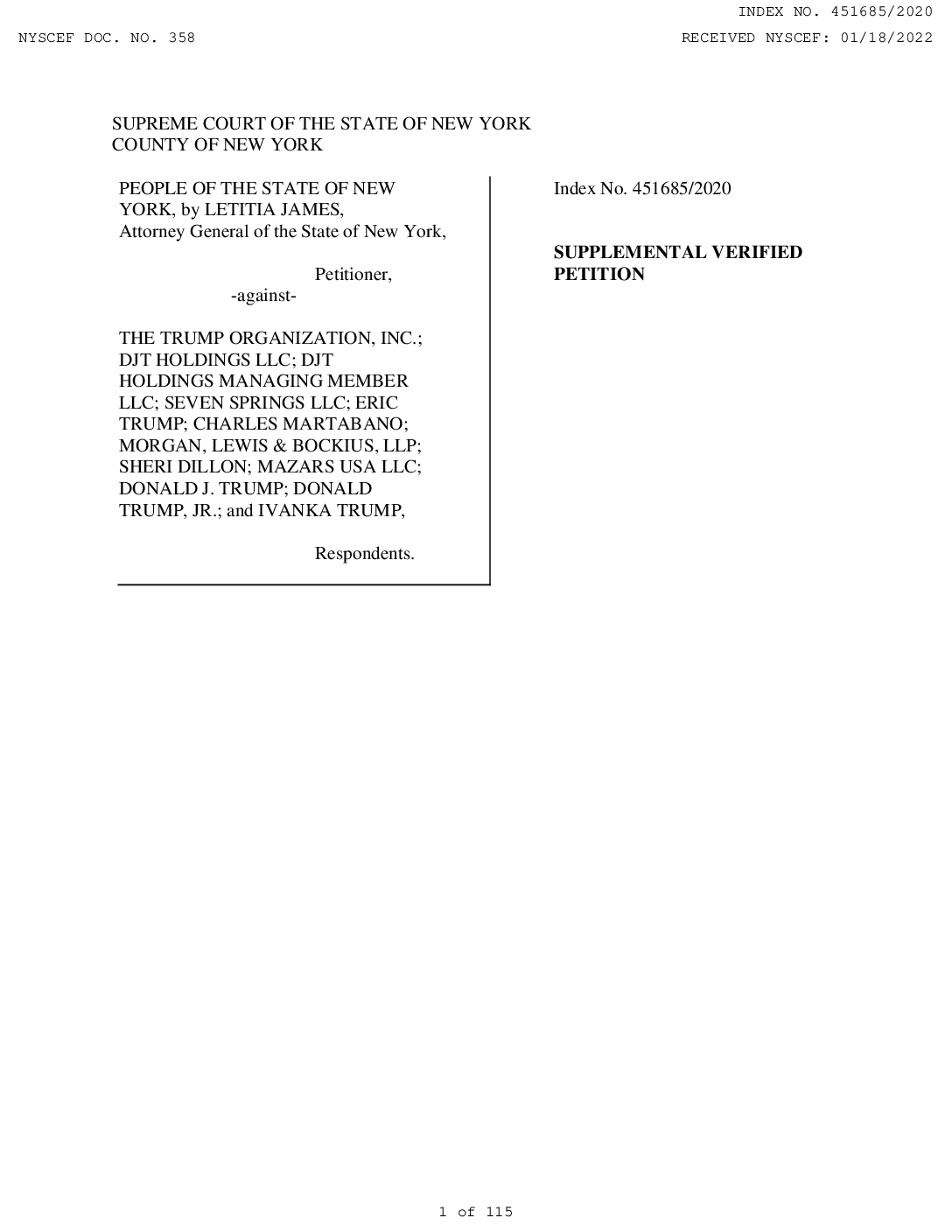 The filing outlined what Ms. James’s office termed misleading statements about the value of six Trump properties, as well as the “Trump brand.” The properties included golf clubs in Westchester County, N.Y., and Scotland, flagship buildings such as 40 Wall Street in Manhattan and Mr. Trump’s own penthouse home in Trump Tower.

Ms. James’s filing argued that the company misstated the value of the properties to lenders, insurers and the Internal Revenue Service. Many of the statements, the filing argued, were “generally inflated as part of a pattern to suggest that Mr. Trump’s net worth was higher than it otherwise would have appeared.”

Ms. James highlighted details of how she said the company inflated the valuations: $150,000 initiation fees into Mr. Trump’s golf club in Westchester that it never collected; mansions that had not yet been built on one of his private estates; and 20,000 square feet in his Trump Tower triplex that did not exist.

“We have uncovered significant evidence that suggests Donald J. Trump and the Trump Organization falsely and fraudulently valued multiple assets and misrepresented those values to financial institutions for economic benefit,” Ms. James said in a statement.

It is unusual for such specific and serious allegations to emerge in court papers — filed less than an hour before a midnight deadline to respond to Mr. Trump’s effort to avoid being questioned — instead of in a formal complaint. Ms. James’s lawyers said that the release of the details would not hamper their investigation, and added that the office was also looking into other conduct not discussed in the filing.

Lawyers for Mr. Trump and his company did not respond to requests for comment.

Because Ms. James’s investigation is civil, she can sue Mr. Trump and his company but cannot file criminal charges. Her inquiry is running parallel to a criminal investigation led by the Manhattan district attorney, Alvin Bragg, which is examining some of the same conduct. Ms. James’s office is participating in that separate investigation, which is continuing. Mr. Bragg, also a Democrat, inherited the inquiry from his predecessor after taking office on Jan. 1.

In early December, Ms. James issued a subpoena for Mr. Trump as well as for Donald Trump Jr. and Ivanka Trump, seeking to question them as part of her civil inquiry. Ms. James already questioned another of Mr. Trump’s sons, Eric Trump, in October 2020. He invoked his Fifth Amendment right against incriminating himself in response to more than 500 questions, the new court filing said.

After receiving the subpoenas, lawyers for Mr. Trump filed a federal lawsuit seeking to halt Ms. James’s civil investigation and to bar her office from participating in the district attorney’s criminal investigation. The lawsuit, which accused Ms. James of violating Mr. Trump’s constitutional rights, argued that her investigation was politically motivated and cited a long list of her public attacks on Mr. Trump.

Ms. James, who is running for re-election this year, argued in the court papers that while her office had compiled evidence that Mr. Trump’s company had engaged in possible fraud, investigators needed to question Mr. Trump in order to determine who was responsible for “the numerous misstatements and omissions made by him or on his behalf” — and whether they were intentional.

A case could be hard to prove. Property valuations are often subjective, and Mr. Trump’s lawyers are likely to note that his lenders and insurers — sophisticated financial institutions that turned a profit off their relationship with the Trumps — did not rely on the company’s estimates.

Ms. James has been investigating Mr. Trump’s business practices since March 2019. In previous filings, she described some of the properties she was scrutinizing and said that her investigators were looking into whether Mr. Trump had inflated values in order to secure loans and obtain economic and tax benefits.

In Tuesday’s filing, she went further, giving examples in which she said the former president’s business had misrepresented the worth of some of its properties and showing how those claims had benefited the company, allowing it to receive favorable loans, insurance coverage and tax benefits.

The accusations center on Mr. Trump’s statements of financial condition, the annual record of his assets and liabilities that he gave to lenders and insurers.

Numerous inquiries. Since former President Donald Trump left office, there have been many investigations and inquiries into his businesses and personal affairs. Here’s a list of those ongoing:

Investigation into tax evasion. As part of their investigation, in July 2021, the Manhattan district attorney’s office charged the Trump Organization and its chief financial officer with orchestrating a 15-year scheme to evade taxes. A trial in that case is scheduled for summer 2022.

Mr. Trump’s lawyers are likely to point to disclaimers in these statements that the data had not been audited or authenticated. But Ms. James’s office said that he “was personally involved in reviewing and approving the statements of financial condition before their issuance.”

In 2015, for example, while seeking to refinance a loan on his 40 Wall Street tower in Lower Manhattan, Mr. Trump’s statement of financial condition estimated that the property was worth $735 million. Yet one lender concluded it was worth only $257 million.

A year earlier, Mr. Trump valued his Aberdeenshire golf club in Scotland at $435 million. But according to Ms. James’s filing, that estimate was inflated, thanks in large part to the Trump Organization’s erroneous assumption that it could build 2,500 luxury homes on the property when, in fact, it had approval to build fewer than 1,500 “holiday apartments,” residences and golf villas.

And for years, the filing asserted, Mr. Trump’s company included the worth of Mr. Trump’s personal brand in some of its valuations of golf clubs, despite saying that it had not.

While Ms. James did not show that the company benefited from every valuation, her filing contended that the company broadly inflated its assets, which may have provided an overly rosy picture of Mr. Trump’s finances to lenders.

Ms. James’s lawyers also argued that Mr. Trump submitted at least two misleading statements to the Internal Revenue Service, saying that he substantially overstated the value of land at both his Seven Springs Estate in Westchester County and his Los Angeles Golf Club. The value of Seven Springs, Ms. James said, had been boosted by counting the value of seven nonexistent mansions, said to be worth $61 million. Mr. Trump received tax deductions worth millions of dollars on both properties.

Investigators accused the Trump Organization of calculating the value of Trump Tower by falsely inflating the size of Mr. Trump’s longtime home: While Mr. Trump had claimed since 2012 that his triplex penthouse apartment in the building was 30,000 square feet, he had signed documents stating its size as 10,996 square feet.

The additional square footage allowed the company to claim a $327 million value for the apartment in statements of financial condition. Ms. James said that Allen H. Weisselberg, the Trump Organization’s longtime chief financial officer, had said during questioning by Ms. James’s investigators that the apartment was overvalued by “give or take” $200 million.

Mr. Weisselberg, the filing contends, also falsely told one of Mr. Trump’s insurance companies that the property valuations were based on assessments by professional appraisers, when that was not the case. In reality, “the valuations were prepared by Trump Organization staff,” the filing said.

Mr. Trump’s company is already under indictment in Manhattan. In July, the former Manhattan district attorney, Cyrus R. Vance Jr., charged the company and Mr. Weisselberg with carrying out a 15-year scheme to dole out off-the-books luxury perks to certain executives. That case is scheduled to head to trial later this year.