The US military covered up a covert army cell that repeatedly killed Syrian civilians during the campaign against Islamic State, The New York Times reported on Sunday.

The unit — called Talon Anvil — struck convoys, car bombs, command centers, and squads of enemy fighters, when it operated between 2014 and 2019, the report said.

Current and former American military and intelligence officials told the newspaper that the covert US army cell repeatedly killed civilians as collateral damage in its operations in Syria.

But Times sources said the cell “circumvented rules imposed to protect noncombatants,” sometimes killing farmers in the middle of their harvest, children on the street, fleeing families, and villagers sheltering in buildings.

“They were ruthlessly efficient and good at their jobs,” one former Air Force intelligence officer who was with the unit from 2016 to 2018 said.

“But they also made a lot of bad strikes,” he said. 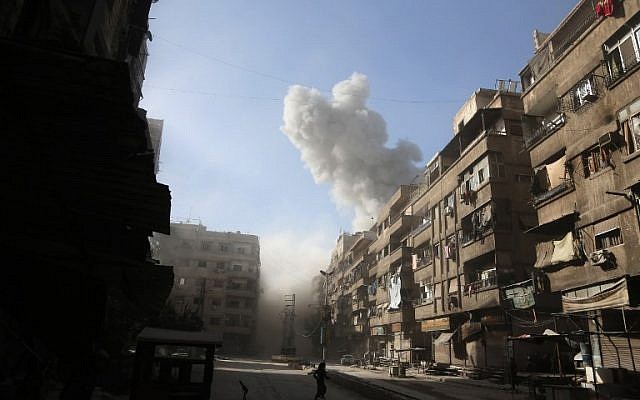 A Syrian woman runs for cover following government shelling on the rebel-held besieged town of Ayn Tarma in the eastern Ghouta region on the outskirts of the capital Damascus, on March 21, 2018. (AFP PHOTO / ABDULMONAM EASSA)

Last month the Times reported that the US military covered up a series of airstrikes in 2019 that likely killed dozens of Syrian civilians during the campaign against IS.

The strikes in Baghuz, in Syria’s east, targeted a group of women and children huddled by a river, who had been identified as such by Air Force personnel monitoring the area. According to the report, personnel were shocked by the bombings and it was not immediately clear who had ordered them.

Some 80 people were killed in the bombings.

It later became clear that the strikes had been called in by a secretive special forces task force that was conducting ground operations in the area, and which often operated without updating other forces in the area.

In response to The Times’ inquiries on the latest report, several current and former senior Special Operations officers denied any widespread pattern of reckless airstrikes by the strike cell and disregard for limiting civilian casualties.

Captain Bill Urban, a spokesman for the military’s Central Command, which oversees operations in Syria, declined to comment to the newspaper.