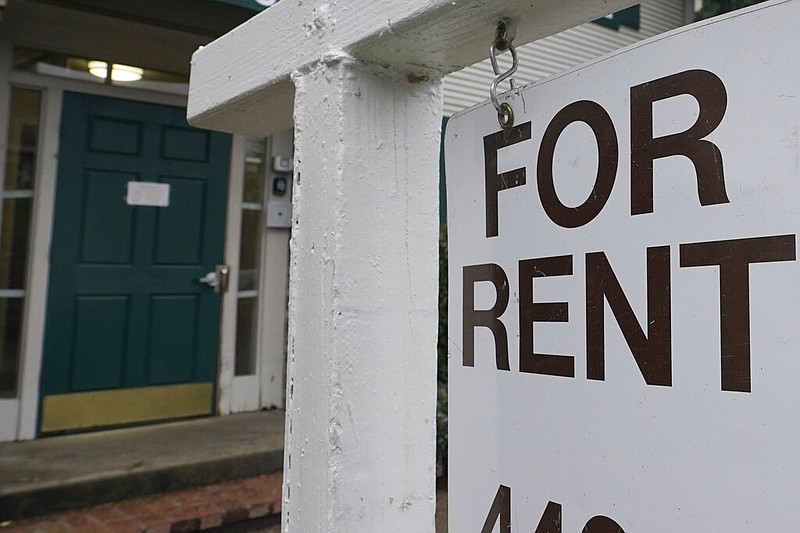 A For Rent sign is posted on a residence for rent in this undated file photo. (AP/Rich Pedroncelli)

The Arkansas Department of Human Services paused applications for pandemic rental assistance Friday and announced a change to the program at the urging of some state legislators, aiming to reduce fraud.

The state received $173 million from the federal government at the beginning of 2021 to distribute to tenants behind on rent and utility payments due to the fallout from covid-19. As of Friday, the state had distributed more than $68 million to more than 22,600 applications, “two-thirds of which were paid directly to landlords and utility companies,” according to a news release from the department.

“That process will still occur, but checks will now have the names of both parties,” the news release states. “This means a tenant will still need to work with the landlord once the check has been received.”

The Department of Human Services made the change after a majority of the Arkansas Legislative Council voted Friday morning to recommend it. Several legislators told department officials they were concerned that landlords were not receiving assistance payments issued solely to tenants, and they asked Human Services officials if and how the department can verify the correct use of the money.

“We’ve done what we can to reduce fraud in the application process and involve the landlords, but when those checks go directly to tenants, we no longer have control over exactly what they do with that money,” said Mary Franklin, director of the department’s division of county operations. “We do not have a mechanism in place at this point to verify that these payments were made to landlords.”

The department has denied “many” applications it considered “suspicious” after reviewing them for eligibility requirements, Franklin said.

The rental assistance program covers past-due rent dating back to April 1, 2020. It also can cover missed utility payments and up to three months of future rent.

The program launched in May and initially required landlords and tenants to submit matching applications to receive assistance. The state later faced pressure to loosen some of the application requirements after it had only given out $7.2 million by the end of August and faced a backlog of more than 8,000 applications.

After a letter from U.S. Rep. James Clyburn, D-S.C., the House majority whip, the Department of Human Services lifted the requirement for landlords to submit matching applications for their tenants. The department still accepts landlords’ applications but has given money to tenants without them since September.

The Department of Human Services contacts landlords whose tenants have applied without them, and landlords have 10 days to respond. The department will still process the tenant’s application if the landlord does not respond.

If a landlord refuses to accept a tenant’s rental assistance money, the tenant can use the money to seek housing elsewhere, Franklin said.

The council’s vote to recommend two-party checks also included a call for the Legislature to audit the rental assistance program.

The state started accepting rental assistance applications from Pulaski County in November 2021 when the county’s program was running low on funds.

Benton and Washington counties distributed all of their rental assistance funds in 2021. Earlier this month, the state reallocated $20 million of its remaining funds to Benton County and $3 million to Washington County, according to documents on the U.S. Department of the Treasury website.

The Department of Human Services has roughly $57 million left to distribute, Franklin said.

More than $50 million worth of applications are “in various stages of review,” according to the news release. Department spokeswoman Amy Webb said some of the $57 million that Franklin mentioned “likely included payments that have been approved from that pool of $50M but have not gone out yet.”

The adjustment to issuing two-party checks “won’t take long at all” and might already be done, Webb said Saturday.

“The pause [on applications] will continue because it also helps us ensure we don’t take in more eligible applications than we can fund,” she said.

Neil Sealy, director of Arkansas Renters United, said he sees the need for “checks and balances” but does not see the need for the pause in applications, especially since the need for rental assistance throughout Arkansas is still widespread.

“Both sides probably have misuse [of the funds], but I doubt to a large degree,” Sealy said. “It’s unfortunate that there are a few who might abuse it on both sides, but I think by and large the money goes where it’s supposed to go.”

Additionally, the Department of Human Services has “denied, canceled or withdrawn” more than $128 million worth of applications — almost three quarters of the original pot of money — since May 2021, the news release states.

Webb said the Department of Human Services does not have specific data on how many applications were denied due to “indications of fraudulent activity.” Other reasons for denied applications include “a lack of response when required information or documents were requested, or simply an applicant who did not meet the eligibility requirements,” she said.

One sign of potential fraud is “if information submitted conflicts with previous data,” she said.

Human Services has a hotline for reports of potential rental assistance fraud, and calls to this hotline have increased over time, Brett Hays, the department’s deputy chief counsel for regulatory, security and compliance matters, told the Legislative Council. The department also has referred a number of denied applications to county prosecutors and 11 of them to the U.S. Treasury Department if the request deemed suspicious exceeded $100,000, Hays said.

State Rep. Richard McGrew, R-Hot Springs, asked if the Department of Human Services could send lists of tenants who have applied for or received assistance to housing authorities or landlords who manage large amounts of housing units. He said this could help verify that the funds are being used properly, an issue that matters to him as a landlord.

Franklin said the department could “explore” the suggestion.

She acknowledged that it might be difficult for landlords and tenants who do not live in the same area to coordinate the signing of the two-party checks. Webb said the department is “looking at this and working to determine if there are any ways we can help with this process.”

Franklin told the Legislative Council that the Department of Human Services currently “can’t catch it all” as far as fraud is concerned.

“We want program integrity, but we are balancing that with the need to get the funds out and help prevent evictions,” she said.